Prof. Vladimir Koutitonsky visited the Institut National des Sciences et Technologies de la Mer (INSTM) in Tunisia for a period of six months to provide practical hands-on training in coastal zone observing systems, as well as providing a grounding in operational oceanography via a series of lectures. Training was provided to 15 young scientists from various countries in North Africa (Morocco, Egypt, Gabon, Algeria, Ivory Coast and Mauritania) as well as a number of students from various institutes in Tunisia.  In addition, a number of “observers” from the host institution sat in on the lectures every day.

Coastal oceanography is not taught at universities in Tunisia and coastal observations are not available at standards that are useful to national interests or international needs, so the training course filled a void and helped to address some of these issues.  Prof. Koutitonsky is fluent in English, French and Arabic, so was ideally suited to teach the group of international students.  He gave a series of intensive applied lectures (in English and French) on the basic knowledge required to ensure a durable operational oceanography programme.  The lectures covered three main topics:

A short research project involving all the students was initiated to monitor and model the circulation and sand transport in the Gulf of Gabes, a semi-circular gulf located along western side of the Sicily Strait in the Mediterranean.  The students helped to deploy the tide gauges which were purchased using funds from the Nippon Foundation (a total of four submersible tide-gauges as well as one Vaisala weather station were purchased). Data from the tide gauges was downloaded on a regular basis and the students carried out data analysis, quality control and numerical modelling.  The students were shown how to set up a simple numerical circulation model so that that data could be used in near-real time.  Some of the resulting value-added products were tidal predictions around the Gulf and water circulation and coastal erosion maps for archiving in the GIS-based oceanographic database of INSTM.  The data collected will also become part of a larger international effort to monitor coastal parameters in real-time along the Tunisian coastline. 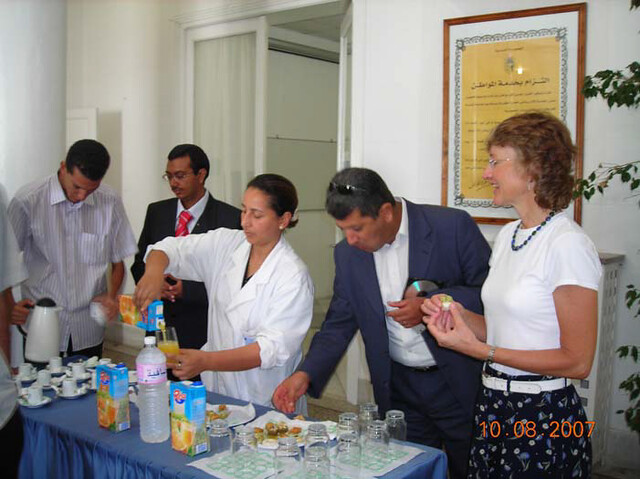