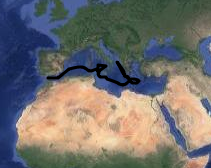 The Mediterranean Short Cruise programme onboard the German RV Maria S. Merian to the Mediterranean Sea occurred in March 2018 (cruise MSM72). The cruise is a section of the GO-SHIP repeat hydrography program and reoccupied the line MED-01 that was last occupied in its entirety in 2011 on the RV Meteor.

“The last few decades have seen dramatic changes in the hydrography and biogeochemistry of the Mediterranean Sea. The complex bathymetry, the highly variable spatial and temporal scales of atmospheric forcing and internal processes contribute to generate complex and unsteady circulation patterns and significant variability in biogeochemical systems. Part of this variability can be influenced by anthropogenic contributions. Consequently, there is a need to document its details as well as to understand ongoing trends in order to better relate the observed processes and to possibly predict the consequences of these changes. The main goal of the cruise was to contribute to the understanding of long-term changes and trends in physical and biogeochemical parameters, such as the anthropogenic carbon uptake and to still evaluate the hydrographical situation after the major climatological shifts in the eastern and western part of the basin, known as the Eastern and Western Mediterranean Transients.

The following science questions were addressed:
1.What are the long-term changes and/or trends in physics and biogeochemistry in the Mediterranean Sea, including all the sub-basins?

2. How is the hydrographic situation in the Mediterranean developing further on after the EMT and WMT? Is there still a trend of the system to return to the pre-EMT situation and is there a similar trend in the WMed?

4.What is the rate of uptake of the anthropogenic carbon in the Mediterranean and is this changing over time?

5.What is the magnitude of variability and trends in the inventory of biogechemical variables (including oxygen and nutrients)?

6.What is the base-line values of rarely measured Essential Ocean Variables (EOVs) such as DOC and N2O”