This program was established in 2005 to allow distinguished professors of renowned oceanographic institutes to teach young scientists in developing countries. One of the aims was to promote collaboration and networking among institutions of developing and developed countries. The programme often allowed the donation of a piece of scientific equipment to the host institution so that the capacity building effort could be sustained in the long term.

Funding from the Nippon Foundation allowed for two Visiting Professors per year, over a period of three years (total of six Visiting Professors from 2004 until 2007), to provide training in their own area of speciality. Each professor spent from three to six months with local scientists and students, giving lectures, advising them on purchase, maintenance and operation of instrumentation, performing hands-on field work, participating in the analysis and interpretation of collected data and generating added value for national management and international needs. The program was terminated at the end of 2007, to be replaced by the Centre of Excellence. May 11, 2016
Prof. Vladimir Koutitonsky (Canada) visited the Institut National des Sciences et Technologies de la Mer (INSTM) in Tunisia for a period of six months to provide practical hands-on training in coastal zone observing systems, as well as providing a grounding in operational oceanography via a series of lectures.
END_OF_DOCUMENT_TOKEN_TO_BE_REPLACED 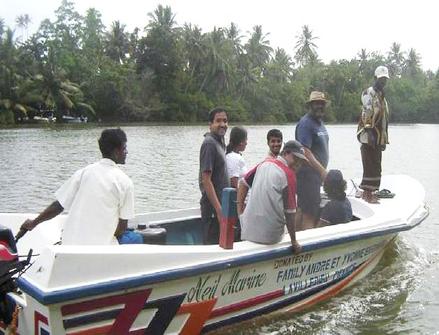 May 10, 2016
Dr. Robert Frouin of Scripps Institution of Oceanography (USA) provided training to 16 trainees from Mexico, Peru, Colombia Venezuela, Argentina, and various Brazilian institutions, in the use of remotely sensed ocean-colour data as a tool for analysing the marine ecosystem.
END_OF_DOCUMENT_TOKEN_TO_BE_REPLACED December 15, 2015
Dr. Motoyasu Miyata (Japan) collaborated with Professor Leon Zann to assist the University in developing its capabilities to provide advanced education in physical oceanography to its students and interested personnel in the South Pacific region.
END_OF_DOCUMENT_TOKEN_TO_BE_REPLACED November 8, 2015
Dr. Trevor Platt (United Kingdom) provided training to students from India, Vietnam, Thailand and Tanzania at the National Institute of Oceanography, Kochi.
END_OF_DOCUMENT_TOKEN_TO_BE_REPLACED
Maps were disabled by the visitor on this site. Click to open the map in a new window.
Scroll to top