Coastal areas of the World Ocean are hotspots of wild life and various human activities. Many species use them as feeding and breeding habitats. People take advantage of their biodiversity for fishing and recreation. Many physical processes are specific to the coastal ocean, including wave erosion, coastal wind-driven upwelling, tidal mixing, and land drainage water redistribution. Those areas are characterized by more intensive variability at low spatial and temporal scales comparing to the deep ocean. Because large amount of population and industries are concentrated near the coasts, coastal ocean is notably affected by pollution. Thus comprehensive scientific information regarding their status and dynamics are required on regular basis in order to understand and manage those systems. Nevertheless, most coastal areas are still poorly covered with data. We propose to develop easy-to-use technical means for coastal ocean temperature measurements available not only for scientists, but also for representatives of general public. We develop the system which consists of compact, cheap (about 100 USD) yet reliable temperature-depth probe, smartphone application and web data portal. Smartphone should be used as compact console for probe control, geolocation device and data transmitter to web. This would extremely increase usability of the probe. Initial data visualization function of the smartphone is also considered. We believe that attraction of general public to ocean observations will increase data collection efficiency, data coverage, ocean literacy, and awareness of ocean care. Temperature measurements are the great point to start such a campaign as this characteristic is relatively easy to measure and intuitively understandable almost for everyone.

The project aims to implement a citizen science approach for continuous temperature profile data collection in the coastal ocean. Simultaneous general public education in the area of oceanography would be an additional outcome of such observational campaign. The general objectives of SAGITTA are: 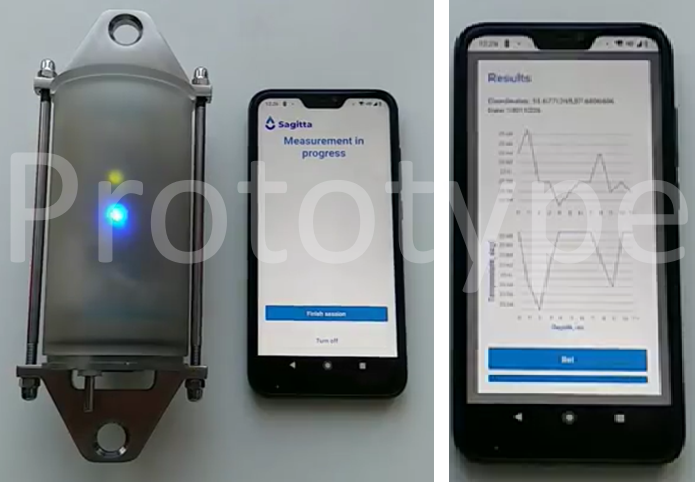 Maps were disabled by the visitor on this site. Click to open the map in a new window.

The aim for the first year was planning of the Project implementation, while the main goal since 2018 has been the development of the system (probe – smartphone application – web portal), the preparation of the probe for production and test in the field.